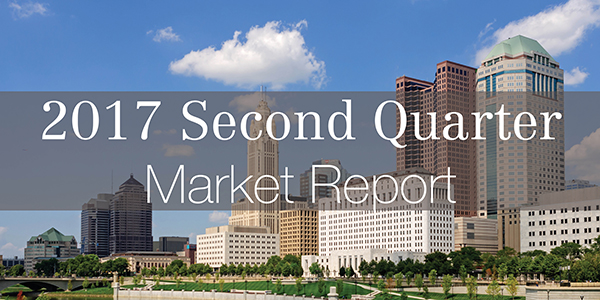 Thanks for taking a look at our second quarter market report, albeit a little late. To those of you who are receiving this because you are a client, thank you for your business! I won’t bore you with the bragging about NAI Ohio Equities many successes and wins for 2017 except to say it has been a good year.
I want to take this opportunity to take a look back at the year 2009 and a controversial decision made by our city fathers to demolish the City Center Mall in favor of a 9-acre park.
At the time, the decision was anything but a slam dunk. Downtown Commission members questioned the wisdom of spending $15 million to demolish 1.3 million square feet of retail that was only 20 years old. And for what; a park and the hope of future development?

Some saw the razing as an admission that downtown could never compete with the suburbs for retail. Others thought the mall should become the home of a casino.
At the time of the decision to demolish the city center, city leaders thought as much as $165 million could be invested at the site. To date, that investment tops $200 million, and Columbus Commons is anchoring development across the southern end of downtown.

In hindsight, it is easy to see that $15 million was a solid investment to trade for the mix of development, greenspace, outdoor entertainment, and concerts in what is now named John F. Wolfe Columbus Commons. The razing of the City Center Mall was ultimately the right decision for the future of Downtown Columbus.
As I get to say each quarter, vacancy continues to fall and rents continue to rise. Please let us know if we can lend a hand to your real estate strategies as we head into fall.